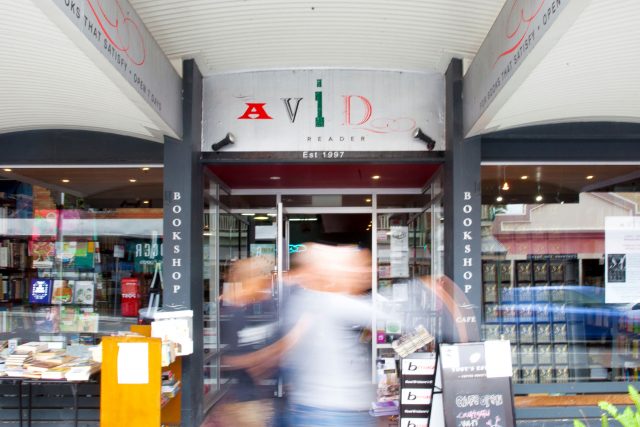 Brisbane’s iconic bookstore, Avid Reader, was awarded 2021 Bookshop of the Year at the Australian Book Industry Awards (ABIA) in April. The award is testament to not only emerging as the centre of Brisbane’s reading culture but by being the centre for the local writing and literary community. We spoke with Fiona Stager, owner of Avid Reader bookshop (and neighbouring speciality children’s and young adult store, Where the Wild Things are), about their ABIA win.

Situated on Turrbal and Jagera land of Meanjin, Avid Reader opened its doors in 1997. The store has become a frequent host of book launches, signings and its many book clubs. Fiona feels, “we’ve been embraced by the community and we’ve embraced the community. We have really established ourselves as a place for authors.”

In fact, Avid Reader’s support for local authors begins behind the counter, employing many aspiring and published writers. Two notable past employees, now authors, Michelle Law and Christopher Currie, described their time there, respectively, as “the most fulfilling workplace,” and a “rare workplace that you’re excited to be a part of, invested in its everyday success and genuinely connected to your community.”

For Fiona, it’s important for the store to act as a conduit between authors and publishers. “We often are the first place that authors do their first reading… I like to think we have a cradle to grave approach where they start off as a reader and then decide to do a writing workshop and then eventually launch their book on our back deck.”

Michelle Law, author of Single Asian Female and the upcoming Asian Girls are Going Places, worked there for five years, following in the footsteps of her two older siblings Ben and Tammy. She started in the Avid Events team, “which was an incredible resource as a writer as I was getting to meet Australian and international authors every week.” Working on the floor kept her up to date with new releases and trends – “from what genres were in vogue and what book designs had been done to death.” But it was working alongside so many incredible writers that was so hugely inspiring. “You’re able to share exciting news with each other and commiserate about the struggles you’re facing as an author.”

Christopher Currie, author of Clancy of the Undertow and The Ottoman Motel, worked at Avid Reader for 13 years. His time there was “certainly an inspiration…” but more importantly, he says, “it was a place where having a creative interest was not something that was ever viewed as getting in the way of my work. Much of this stems from Fiona Stager and Kevin Guy, who believe so much in what a bookshop can mean to both micro and macro communities… and what it can mean for employees who are empowered to pursue their artistic interests and to treat every aspect of a ‘transactional’ experience with compassion, integrity and good humour.”

Fiona told us, “Our staff are our greatest strength,” but Avid Reader’s commitment to community goes beyond authors, with a concerted effort during COVID-19 to coordinate with Brisbane Domestic Violence Services, running book, games and toiletry drives to assist vulnerable women and children suffering from domestic violence. “Women and children often have to flee violent situations without anything. They are then placed in hotel rooms with nothing to entertain or comfort the children. We gave 10% off anything bought from our shops.”

Avid Reader struggled immensely, as many other retailers did, during the pandemic. The store, often at expense to themselves, transformed their events online, broadening their reach across Australia. When asked why Avid Reader was so committed to hosting online events, Fiona said, “I really felt for those debut authors. All of their tours had been immediately cancelled. I felt a commitment to them and also to our readers.” Fiona and the staff were encouraged by the positive feedback from these events which engaged literary communities across the country and put Brisbane’s literary community in the spotlight. Now the Avid team are working towards hybrid events, trying to find the right balance between engaging online audiences and serving physical attendees their wine!

Another issue important to Fiona is the store’s commitment to First Nation voices and local issues. Having grown up in far north Queensland and working in Aboriginal land management, Kev and Fiona saw prioritising Aboriginal and Torres Strait Islander voices as “a natural part of our business.” Alongside actively hiring Aboriginal and Torres Strait Islander staff, they look for First Nation authors to participate in panels, and use First Nation books for their book clubs and book of the month program. “It’s very organic. It’s something we’re always learning about. Things like going to Black Lives Matter marches is really important and we’re lucky that we can do that. That’s who we are.”

Michelle Law commended Avid Reader for being a store that, “actually walks the talk when it comes to their politics. I learn so much from Fiona and Kev about what it means to be ambassadors for what you believe in.”

While still riding the wave of their ABIA win, Avid Reader has even more to look forward to, now one of three bookstores in the world nominated for London Book Fair’s International Excellence Awards – Bookshop of the Year. Despite being baffled by the shortlisting, Fiona muses that, “I really think it’s because we represent all those hundreds and thousands of booksellers throughout the world who don’t have grand, beautiful 100 year old premises. We’re working in the spaces we have and can afford. We’re working within our communities… I’m really proud to be a bookseller. I feel like we’re representing the everyday, hardworking, extraordinary bookseller… But I’ve got my money on the Romanian bookshop.”